Changes in the amount of carbon stored in the oceans are thought to have played an important role in past variations of atmospheric CO2 and climate. Deep circulation controls the ocean's storage and redistribution of heat and carbon. Climate changes in turn affect physical (e.g. dust and iron supply, mixing, upwelling) and biological (e.g. plankton productivity) processes in the oceans. Recent model simulations imply that a combination of these processes could explain glacial-interglacial CO2 variations. New paleo data reveal the transition of circulation, atmospheric CO2, and climate from the Last Glacial Maximum, ~21,000 years ago, to the present in unprecedented detail including several rapid changes. However, the evidence from the deep ocean is still extremely limited. 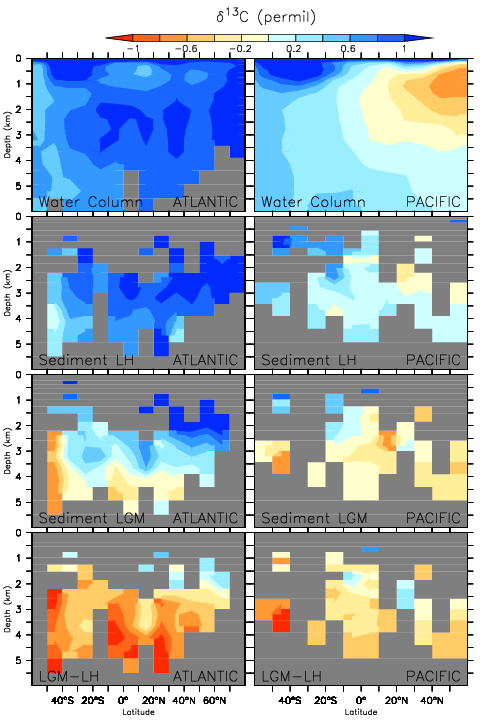 Stable carbon isotopes (δ13C) are routinely measured on shells of fossil benthic (deep dwelling) and planktonic (near surface) foraminifera and have been used for a long time as a proxy to infer both carbon cycling as well as deep ocean circulation in the past. A large number of data has therefore been measured. However, δ13C is determined by air-sea gas exchange as well as by biological processes, which made unequivocal interpretations difficult. Moreover, a global assessment of how reliably different species of foraminifera represent the water column has not been undertaken. These difficulties may have led to many measurements being unpublished and unreported. Fortunately, in recent years, process based models including δ13C have been developed and a new global dataset of water column δ13C measurements has been compiled. Here we propose a project to synthesize δ13C data from both benthic and planktonic foraminifera including unpublished and unreported data. Coretop data will be carefully compared to the water column measurements and errors and biases will be documented. Planktonic δ13C data will be calibrated using species specific equations. Downcore data will reveal changes in ocean circulation and carbon cycling and will be useful for comparison with other paleo data (e.g. from ice cores or speleothems) and transient model simulations. Focus of the downcore compilation will be on the last glacial cycle and in particular on the last deglaciation. Specific science questions addressed are:

Fig. 3: Map of current down-core database and regions used in the regional syntheses.

OC3 plans to work on data syntheses and quality control in four regions. Each group is led by the following pair of scientists.